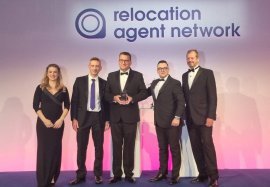 We are proud to announce that we have been crowned ‘Best Agent in the West Midlands Region’ by Relocation Agent Network.

Held at the Hilton Birmingham Metropole on Friday 3 December the Awards Dinner was hosted by television broadcaster and technology journalist, Georgie Barrat.

The annual prize gives the winning Network member the title of ‘Best Agent in the West Midlands Region’ and is awarded on a number of strict criteria including customer satisfaction and a proven record of helping relocating buyers move in and out of the local area as well as their overall support to Relocation Agent Network and its members.

Carl Watts said of their win, “We are delighted to have received this award, which names us the best agent in the region. Not only does it show our customers that we are one of the area’s leading agents, but it rewards all the Brown & Cockerill team for their hard work and commitment over the last 12 months.”

5 Ways To Spruce Your Home For Spring

Maintaining you rental property this winter

Why Autumn is a good time to make the move

A guide for first time tenants

Why You Should Rent Through A Reputable Agent

Top tips on being ready to sell your property

How has the property market been impacted after the stamp duty changes?

Common mistakes when selling your home and how to avoid them

Top tips on increasing the rental value of your property

Property price predictions for the rest of 2021

A beginner's guide to selling a property

A guide on buy-to-let mortgages

Everything you need to know about the Stamp Duty changes

Tips for renting out a property

How to maximise your house value in the current climate

Restaurants to Visit in Rugby, Warwickshire

Rental prices are on the rise

Five top tips for getting your garden spring-ready ...

What The Government’s 95% Mortgage Scheme Means For Buyers

“What should you spend time and money on when improving your property?”

What is the difference between Outline and Full Planning Permission?

Shared Ownership - What is it?

We win GOLD for the 3rd year running.

It's Official - We are the Best in Rugby!

The Pros and Cons of 'Online' Estate Agents

The importance of your credit rating when applying for a mortgage

Thinking about selling but worried about the length of your lease?

Tenant Referencing - what you need to consider

How to Spot and Tackle Japanese Knotweed

10 things to do before applying for a mortgage

Woodworm Treatment - The ins and outs that you need to know

Selling Your House? Don't Wait for the New Year!

Thinking of Buying a Second Home? a guide to stamp duty changes.

Rents Rising Across Most of the UK

FEBRUARY is here which means it is the month of LOVE

This Year We Are Celebrating Our 20th Anniversary !

Do your tenants have the Right to Rent?

Buying or selling a property with asbestos?

Gazundering: A guide to what it means and how to avoid it!